Baptism is the initiation of a new Christian into the church. During the time of Jesus, and as practiced by John the Baptist, baptism was a rite that members of the Jewish community practiced as a means of preparation, a symbolic washing away of sin, in anticipation of the coming of the Messiah.

In the early Christian church, baptism took on a different meaning, becoming, along with the rite of Holy Communion, one of the sacraments of the church. In baptism, a new Christian underwent a rebirth. In a very real sense, a person being baptized died to sin, and rose again as a new creation in Christ.

In Matthew 28:19, in his last command to his disciples before ascending into heaven, Jesus instructs his disciples to “Go therefore and make disciples of all nations, baptizing them in the name of the Father and of the Son and of the Holy Spirit.” Ever since then, Christians have strived to fulfill this “Great Commission,” and make believers of all the people of the world.

For an independent minister, an important task in your ministry will be performing baptisms. There are some decisions you, as a minister, will have to make about your own understanding of baptism so that you can perform this act with integrity.

Different denominations have different understandings of who is eligible to be baptized. Some faith traditions (Roman Catholic, Episcopal, United Methodists among others) practice what is known as Infant Baptism. It is believed by these churches that Baptism is a gift from God, available to all people, even those who are not capable of choosing to accept baptism for themselves (such as babies). And in the case of the Catholics, it is believed that only those who have been baptized are able to enter the Kingdom of Heaven. So baptism takes on such importance that if anyone is in danger of death, and they or their family members have this understanding of baptism, you may very well be called into situations where it is vitally important for those who have summoned you that a Baptism is performed without any delay.

Some faith traditions (such as one of the many varieties of Baptists) practice what is known as believers baptism. In this view, only those who are old enough to understand what baptism means, and are able to articulate their belief in Jesus as Lord and Savior, are eligible for Baptism.

These differing views of baptism are one of the reasons there are so many different denominations of Christianity. As an independent minister, one of the things that you will have to decide for yourself is what does baptism mean to you, and how you, with integrity, practice baptism on those who you may be called to minister to.

You should also be aware that in some denominations, how the baptism is performed is very important. In most Baptist churches, for example, the only valid manner of baptism is one that was done through the practice of immersion. In immersion, the person being baptized is held under the water during the rite. This can take place in any standing body of water such as a pond or lake, in a river, or in a special baptismal pool that most Baptist churches have.

In churches that practice infant baptism, this rite can be performed in a couple of different ways. Either by sprinkling water over the person being baptized, our pouring water over the persons head. Typically, the water being used would have been blessed beforehand (ie made into Holy Water). This can be done by reciting a simple prayer over the water such as this.
“Creator God, your gift of water brings life to the world. Pour out your Holy Spirit on this offering of water to bless and make it holy. Let those who are baptized in it have their sins washed away, and let them be clothed in righteousness throughout their lives, that dying and being raised with Christ, they may share in his final victory; through Jesus Christ our Lord. Amen.”

In most cases, though not always, a person who has been baptized in one denomination will on transferring to a different denomination have their baptism accepted as valid, as long as the baptism was performed using what is called the “Trinitarian Formula.” That is, the person was baptized using these words. “Name, I baptize you in the name of the Father, and of the Son, and of the Holy Spirit. Amen.”
As a minister, one thing you should always provide to a person you have baptized is a baptismal certificate. You can purchase these from any church supply store, or from groups like the Universal Life Church. You can also easily make your own using a graphics program on your computer and a printer. The certificate should be worded something like this.

This is to certify that NAME was baptized in the name of the Father, Son, and Holy Spirit by NAME OF MINISTER on DATE at LOCATION.

The certificate should also have your printed name and signature. If you are serving a church, it should also have the name and address of that church. The reason it is important for you to provide a certificate of baptism is that when the person you baptized wants to join a different church, or get married at the churches of some denominations, they will need to be able to provide proof of their baptism. Without it, they may be forced to go through that churches process of preparing a new convert for baptism (which in some churches is a very long process). Even with this certificate though, you should realize that some churches may not accept the baptism you performed as valid. Typically this will only be an issue with churches that practice believers baptism, and perform baptisms by immersion.

Another issue you may face is that occasionally, someone will come to you wanting to be baptized a second or third time. In some faith traditions, multiple instances of baptism are not allowed. The theological view being that baptism is a gift of God, only needed once in a persons life. You should give some thought as to what your own faith will allow you to do with integrity in these situations. Many denominations have a ritual known as a “Reaffirmation of Faith” that can be used when someone desires to be rebaptized but when a second or subsequent baptism is not something that you feel you can do with integrity.

As an independent minister, you are free to develop a baptismal ritual that is a formal or informal as you desire. Just remember that you must use the Trinitarian Formula. The manner of the baptism, be it by immersion, pouring, or sprinkling, can be left up to your own personal theological views, and those of the people who you have been called to serve. 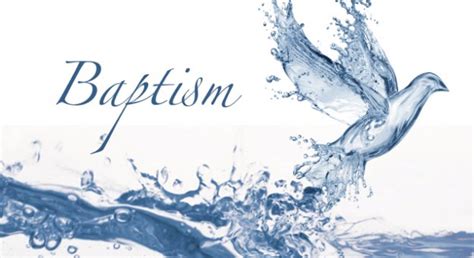